The program has been criticized for a lack of transparency and for being used as a tax dodge, but developers say it is “a great tool to have in the toolbox.”

Following a slow rollout of rules governing opportunity zones, a program Congress approved three years ago to encourage investment in low-income neighborhoods, developers have pumped billions of dollars into the zones nationwide, even in the midst of the pandemic.

The program has drawn myriad detractors, including critics who charge investors are using it simply to avoid paying taxes. Others point to a lack of transparency that makes it tough to gauge whether the investments are making a real impact on communities.

The Trump administration has resisted providing much federal reporting or oversight, but some states and cities are using the initiative to help steer investment into their underserved neighborhoods and track how much residents are benefiting from it.

Tech’s soaring property demand has been mostly a boon for cities, although it has fueled some concerns over rising rents and gentrification

The biggest U.S. tech companies are providing a jolt to the slumbering commercial real-estate business, emerging as major tenants and acquirers of office and other space while many nontech firms are trying to tear up their leases.

Five of the biggest property owners in the tech industry—Amazon.com Inc., Facebook Inc., Apple Inc., Google parent Alphabet Inc. and Microsoft Corp.—together occupy around 589 million square feet of U.S. real estate, according to CoStar Group. That is more than all of the office space in New York…

Alphabet Inc.’s former chief executive officer applied to become a citizen of Cyprus, according to an announcement last month in a Cypriot newspaper that was first reported by the website Recode. Schmidt, 65, joins a growing club of individuals participating in government programs enabling foreigners to acquire passports.

In previous years, U.S. citizens rarely sought to buy so-called golden passports. The business mainly thrived targeting people from countries with fewer travel freedoms than the U.S., such as China, Nigeria or Pakistan.

But that’s changing. People close to the industry say they’ve been inundated with inquiries from citizens of the world’s richest country.

“We haven’t seen the likes of this before,” said Paddy Blewer, a London-based director at citizenship and residency-advisory firm Henley & Partners, referring to queries from U.S. individuals. “The dam actually burst — and we didn’t realize it — at the end of last year, and it’s just continued getting stronger.”

A spokeswoman for Cyprus’s government declined to comment. Representatives for Schmidt — who is worth $19 billion according to the Bloomberg Billionaires Index — didn’t respond to requests for comment.

Jonathan is the CEO of SqaureFoot, a Manhattan based real estate tech startup that has raised close to $30 million in venture capital. On this episode, Jonathan joins Steve to talk about the impact of Covid on the office sector, what role companies have to play in our political discourse, his new rolling fund, investing in startups and much more. 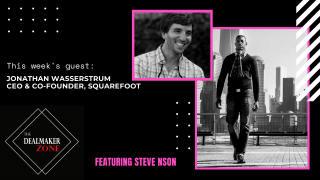 The U.K. risks losing its status as a premier shopping destination after a popular tourist tax break expires, posing a new threat to retail property owners already whipsawed by the pandemic and Brexit.

Starting in January, foreign visitors will no longer be able to reclaim a sales tax of 20% for items bought in the U.K. for 30 British pounds—equivalent to about $40—or more.

6. Here’s how the workforce will change in the coming decades: MIT report | CNBC

The predictions were scary. Half of the jobs in industrialized countries could, one day, be taken over by robots. What would workers do? How would they earn a living?

In 2018, a taskforce at the Massachusetts Institute of Technology set out to answer these questions. Over the next two years, more than 20 faculty members and 25 graduate students spread out across the globe, from Scandinavia to Germany, interviewing some 200 companies to try to get a better snapshot of the future of work.

The more pressing threat, the researchers found, was not necessarily the one we’d imagined. Sure, robots and artificial intelligence were becoming more and more capable, but most companies expected the technology to create new and different jobs rather than to reduce their total positions.

7. Divvy Homes Says Rent-to-Own Deals Work. Next Year Will Be a Test.| The New York Times

Portraying itself as a good guy in a seedy corner of home sales, Divvy has received mixed early reviews. But the bulk of its clients will soon have to decide whether to buy or back out.

With high eviction rates, substandard properties and shady legal practices, rent-to-own home businesses are one of the darkest corners of the real-estate world. Financially vulnerable people seeking a piece of the American dream often end up swindled for money and property improvements, then booted on to the street.

Divvy Homes, founded three years ago and backed by highflying Silicon Valley investors, has said it aims to change all that.

The global adoption of remote work may leave the rising powers in the East behind.

The big picture: Despite India’s and China’s economic might, these countries have far fewer remote jobs than the U.S. or Europe. That’s affecting the emerging economies’ resilience amid the pandemic.

Driving the news: 16% of jobs in China and 12% of jobs in India can be done remotely, per a new McKinsey Global Institute analysis of 800 jobs across several nations. Compare that with the 33%, 30% and 29% of jobs that be done from home in the U.K., Germany and the U.S., respectively.

If you think bankruptcies have been a scourge in the pandemic so far, brace yourself—they’re set to rise dramatically.

The business busts will strike small firms disproportionately, which is bad news for more than just the business owners. It’s bad for the whole economy, because the surge of financial pain may overwhelm the bankruptcy system. As a result, the process could become chaotic, with viable businesses killed and doomed ones kept artificially alive. A major part of the problem: There are not enough bankruptcy judges.

That worrisome outlook emerges from new research by Robin Greenwood of the Harvard Business School, Benjamin Iverson of Brigham Young University’s Marriott School of Business, and David Thesmar of the MIT Sloan School of Management.

According to a report from Technavio, the inspection robot market has the potential to grow to $3.72 billion between 2020 and 2024, bolstered by industries spanning energy, oil and gas, and mining. Beyond their cost-effectiveness, robots have the ability to travel where humans can’t — either for safety or physical reasons. Machines like Spot can also be equipped with specialized hardware that delivers more detailed, consistent analytics and insights than an inspector could.

“The pandemic both highlighted and accelerated the need for many large industrial companies to consider remote autonomous data collection and autonomous analysis using our drones to mitigate some of the risk,” a Percepto spokesperson said in a statement. “[It also] highlighted the exposure of heavy industrial sites due to the reduction of on-site workforce which seriously impeded both planning and operations, significantly increasing the risk to business continuity and security.”