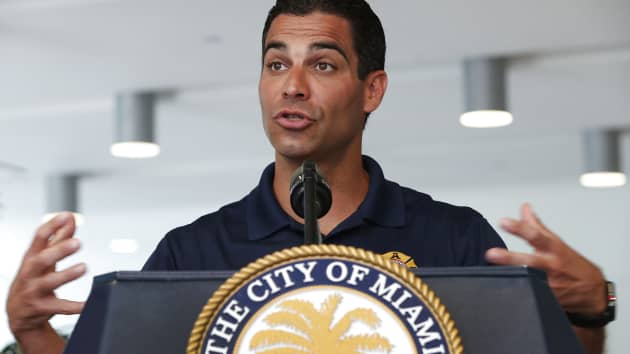 Miami Mayor Francis Suarez was leaving lunch at tech billionaire Peter Thiel’s house and on his way back to City Hall when he got a text from an unknown number.

The person was polite, wanting to catch up and congratulating him on a job well done, so Suarez asked whom he was speaking with, to which he got back “David B.” Not really clearing anything up, Suarez responded “last name?”

It was David Beckham.

Suarez’s schedule and phone have blown up since he accidentally launched a Twitter campaign to make Miami the latest innovation hub in early December, when someone on the app suggested bringing Silicon Valley to the Sunshine State. His “How can I help?” response generated 2.3 million organic impressions alone, he says.

2. These Companies Want to Charge Your Electric Vehicle as You Drive | WSJ

Enthusiasm for electric vehicles has long been held back by concerns about battery life, but what if drivers were able to charge their cars while driving?

Several automotive, utility and infrastructure companies are testing technology that promises to allow electric cars, buses and trucks to charge on the move. The process, known as dynamic charging, involves under-road pads that wirelessly transmit electricity to receivers mounted underneath cars and, for some larger vehicles, overhead wires like those used by trams.

3. Most Major Economies Are Shrinking. Not China’s. | The New York Times

SHANGHAI — As most nations around the world struggle with new lockdowns and layoffs in the face of the surging pandemic, just one major economy has bounced back after bringing the coronavirus mostly under control: China.

The Chinese economy rose 2.3 percent last year, the country’s National Bureau of Statistics announced on Monday in Beijing. By contrast, the United States, Japan and many nations in Europe are expected to have suffered steep falls in economic output.

China’s strength seemed improbable a year ago, when the virus emerged in the central Chinese city of Wuhan. As travel and business ground to nearly a halt, the economy shrank 6.8 percent in the January-March period compared with 2019, the first contraction in nearly half a century.

4. Restrictions Around Trump Tower to Scale Down After Inauguration | WSJ

Heightened security, including the presence of police barriers and foot patrols, has been a feature at the Midtown Manhattan building since the election of Mr. Trump in 2016. The NYPD and federal authorities currently maintain a 24-hour security force around the building.

The Trump Organization has its headquarters in the building, on Fifth Avenue between East 56th and East 57th streets. Mr. Trump also has a residence there.

5. The Rich Are Minting Money in the Pandemic Like Never Before | Bloomberg

Americans have become, by some measures, richer during the pandemic than ever before.

It’s a difficult thing to fathom, what with the economic collapse and the surge in the ranks of the jobless, the homeless and the hungry. But there’s a whole class of people — at least the top 20% or so of earners — who’ve had to worry little about such matters.

For them, not only has it been relatively easy to carry out their white-collar jobs from home. But the Federal Reserve’s unprecedented emergency measures — including slashing benchmark rates to zero — have padded their wallets too. They’ve refinanced their mortgages at record low rates, purchased second homes to get away from cities and watched the value of the stocks and bonds in their investment accounts surge.

Virgin Orbit launched its LauncherOne rocket to orbit for the first time today, with a successful demonstration mission that carried a handful of satellites and delivered them successfully to low Earth orbit on behalf of NASA. It’s a crucial milestone for the small satellite launch company, and the first time the company has shown that its hybrid carrier aircraft/small payload orbital delivery rocket works as intended, which should set the company up to begin commercial operations of its launch system very soon.

This is the second attempt at reaching orbit for Virgin Orbit, after a first try in late May ended with the LauncherOne rocket initiating an automatic safety shutdown of its engines shortly after detaching from the ‘Cosmic Girl’ carrier aircraft, a modified Boeing 747 that transports the rocket to its launch altitude. The company said that it learned a lot from that attempt, including identifying the error that caused the failsafe engine shut down, which it corrected in advance of today’s mission.

7. Bill Gates is largest owner of private farmland in U.S., with acreage across 18 states | GeekWire

A new report on the largest holders of private farmland in the United States reveals that Bill and Melinda Gates are atop the list, with the billionaire Seattle couple amassing 242,000 acres of land.

According to The Land Report, the Microsoft co-founder owns farmland across 18 states, with the largest holdings being in Louisiana (69,071 acres), Arkansas (47,927 acres) and Nebraska (20,588 acres). Gates also owns a stake in more than 24,800 acres of transitional land outside of Phoenix.

A Tri-City Herald report on the 2018 purchase of 14,500 acres of farmland in Benton County, Wash. — for a staggering $171 million — is what set The Land Report and editor Eric O’Keefe digging further into Gates’ holdings.

8. What to Know About Vaccine-Related Deaths, Allergies | Bloomberg

Like all new drugs, the vaccines that have been authorized to protect against Covid-19 come with some safety concerns and side effects. Many people who’ve received the first two Western shots deployed, one from Pfizer Inc. and BioNTech SE, and another from Moderna Inc., have experienced fever, headache and pain at the site of the injection. These side effects generally disappear quickly. More worrisome, Norway has reported deaths among elderly people with serious underlying health conditions following administration of the Pfizer-BioNTech vaccine — possibly linked to those side effects. A few other recipients of the various jabs have had a serious, but treatable, allergic reaction, called anaphylaxis.

Leeds-based proptech CurveBlock has added its first VC firm to its list of backers, after agreeing terms with Loyal VC, a global investor.

CurveBlock, which will use blockchain technology to allow individuals to invest in property and receive payouts from every sale, has its sights set on further growth, and has the backing of 19 angel investors as well as Loyal VC.

The goal of CurveBlock is to open up property investment – traditionally an exclusive world – to the wider population, and let them invest an amount that works for them. Its mission statement declares, “With as little as £10, you can be a part of a multi-million pound construction company’s profits. You profit each time we build and sell a project.”

Commenting on the deal with Loyal VC, CurveBlock co-founder Gary Woodhead said: “This is fantastic news not just for us but for the whole Northern Powerhouse as it’s clear that venture capitalist firms are waking up to the opportunities which exist outside of the M25.

It’s one of New York City’s biggest real estate events of the year: Thousands of attendees fill the Jacob Javits Center for the International Council of Shopping Centers retail show.

The December event was canceled, as virtually everything was last year. But today, Javits is one of the vaccination sites the real estate industry is counting on to bring New York back to pre-Covid life.

In the parlance of real estate, widespread vaccination is seen as a leading indicator. Real estate’s recovery is expected to follow, though some segments are expected to take longer than others.

“I think you’re going to have pockets of real explosive growth,” said Marcus & Millichap’s Eric Anton, who noted decimated sectors like retail and hospitality have the most potential to rebound. “I think it will spur confidence in multifamilyin New York and New Jersey, which seem to be tumbling beyond recognition.”