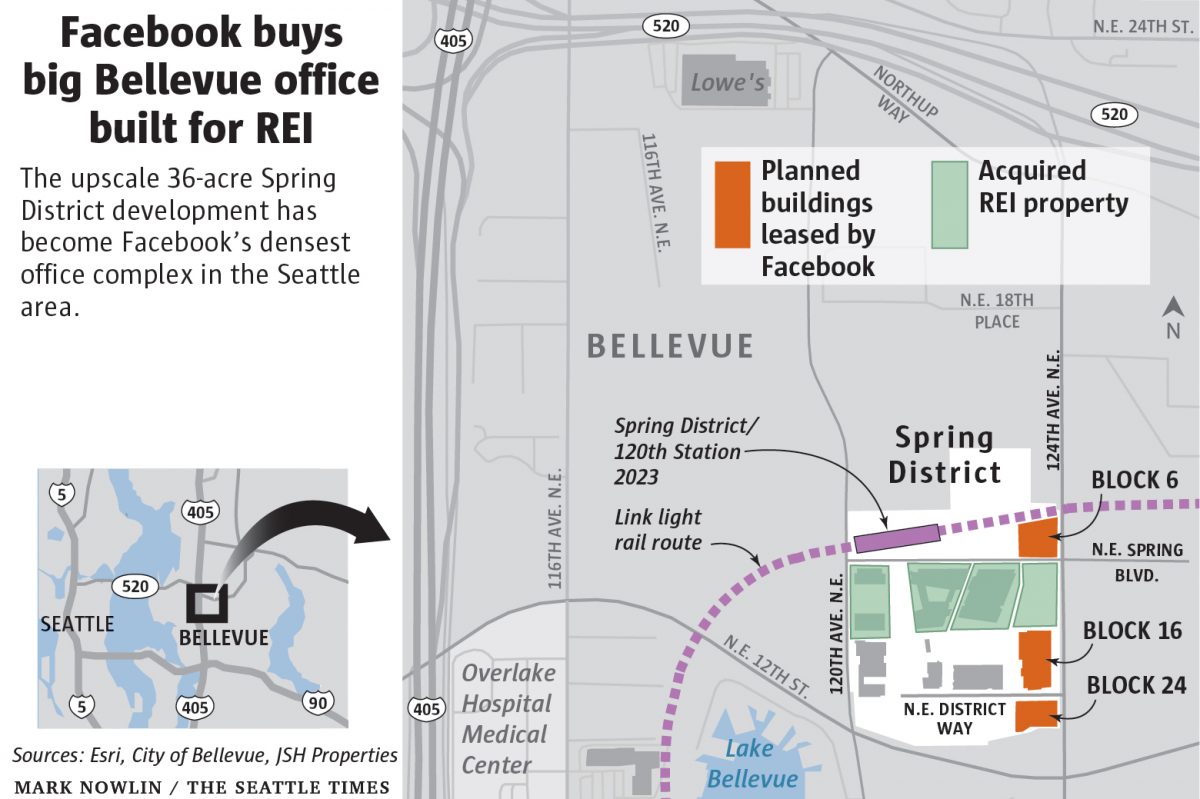 The move further consolidates Facebook’s Eastside mini-empire in the upscale, multiuse Spring District east of I-405. Before the acquisition of the 400,000-square-foot REI offices, Facebook was already on track to lease nearly 850,000 square feet in three under-construction Spring District buildings.

Facebook, which opened its first Puget Sound office in 2010 with three engineers, now employs more than 5,000 local workers across 3 million square feet of space in dozens of locations in Seattle, Bellevue and Redmond, placing it neck-and-neck with Google for the title of the area’s largest out-of-town tech employer.

The Seattle area is home to Facebook’s second-largest engineering hub, after its Menlo Park headquarters.

“Our growth over the last decade is a testament to the thriving community and immense talent pool that has welcomed us with open arms,” said Nick Raby, Facebook’s director of North American real estate, in a statement. “This purchase doubles downs on our investment in Bellevue and our commitment to the Pacific Northwest.” 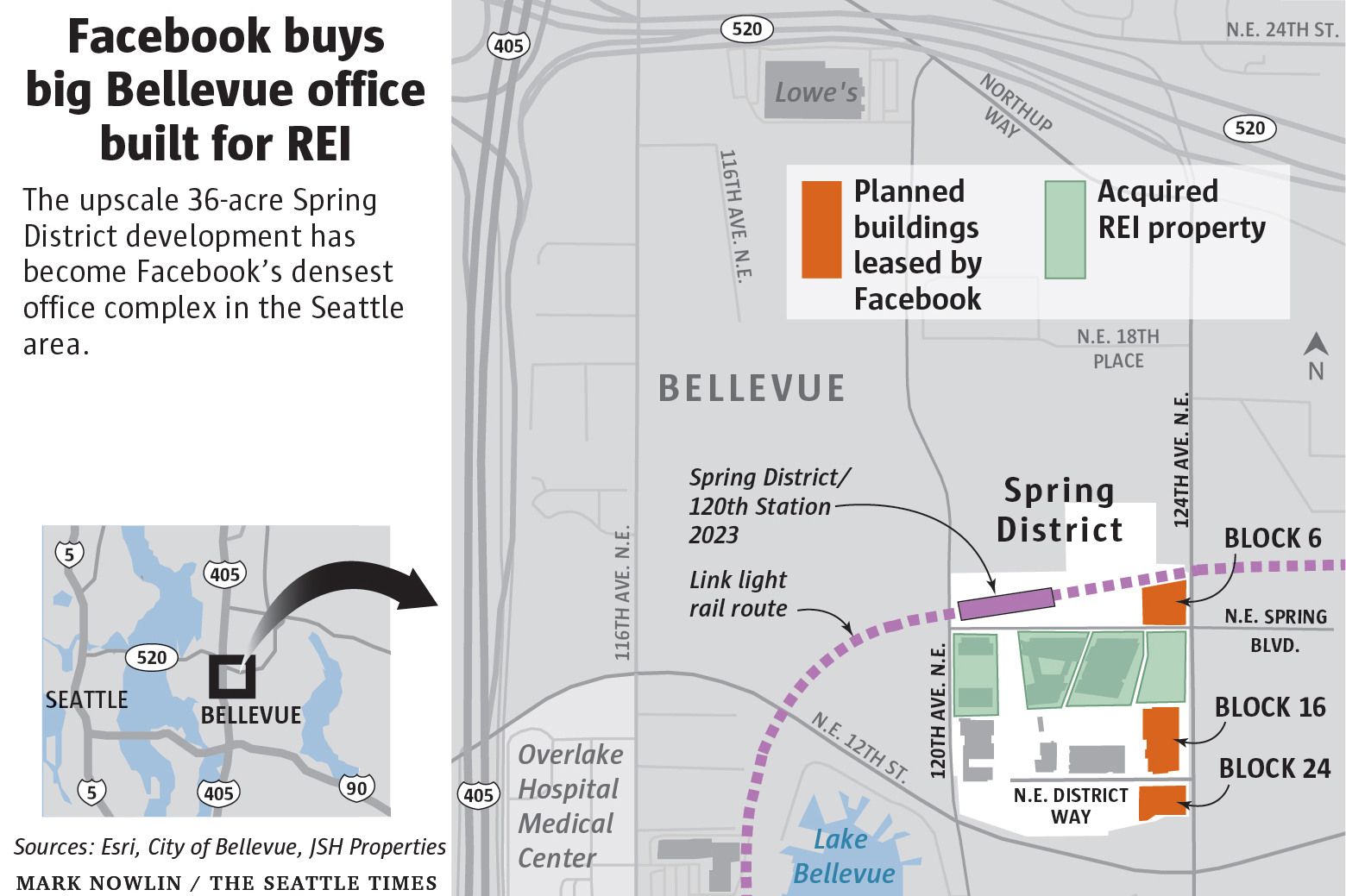 When it comes to new development, buyers who are choosing to stay in New York — and have the means to stay — are choosing Brooklyn and Queens.

Five months after Covid-19 crippled the city’s real estate market, sales across the city are down, but the boroughs beyond Manhattan are faring better, in some rare cases even exceeding pre-pandemic expectations.

While the New York exodus, to the suburbs and beyond, has so far been overstated, many of those who have left were affluent residents with second homes and had played a disproportionate role in supporting the overpriced Manhattan condo market, which was already slumping before Covid-19.

Citywide, more than 60 percent of new condos remain unsold — and much of that supply had accumulated before the virus arrived, according to Kael Goodman, the chief executive of Marketproof, a real estate analytics company

New York City business associations have hired additional security guards this summer in the midst of a surge in violent crime and a decrease in arrests by police.

Three business-improvement districts in Manhattan and a neighborhood group in Queens said they have added private guards to patrol streets and public spaces.

In addition to the holiday shopping rush, Amazon plans to hold Prime Day this fall, after postponing it from July.

Amazon will hire another 100,000 people to keep up with a surge of online orders.

The company said Monday that the new hires will help pack, ship or sort orders, working in part-time and full-time roles. Amazon said the jobs are not related to its typical holiday hiring.

The Seattle company reported record profit and revenue between April and June as more people turned to it during the pandemic to buy groceries and supplies.

The company already had to hire 175,000 people earlier this year to keep up with the rush of orders, and last week said it had 33,000 corporate and tech jobs it needed to fill.

This time around, Amazon said it needs the people at the 100 new warehouses, package sorting centers and other facilities it’s opening this month.

The vast majority of single homeless adults moved from shelters to stop the spread of COVID-19 were relocated to hotels in Manhattan, the city’s Department of Homeless Services data shows.

Of the 8,969 single adults assigned to “COVID-related” hotels, more than 5,400 are living in 32 Manhattan hotels — with at least 3,000 concentrated in Midtown, Hell’s Kitchen and Chelsea.

Those numbers are a stark contrast to other boroughs.

Staten Island hotels haven’t housed any single adults as part of the city’s effort to reduce the density in shelters and prevent the spread of COVID-19, city data shows.

More recent data suggests there’s a bigger homeless population in Midtown hotels — up to 4,300, according to Barbara Blair, head of the Garment District Alliance. The numbers are consistent with a wave of complaints from borough residents fearful about the influx.

Global investors have disproportionately reduced spending on commercial real estate in Asia Pacific compared with other regions amid the pandemic and the outlook remains challenging, according to a report.

Total volume of commercial property acquisitions, including office, retail and hotels, was about 65% of the levels recorded in the last two years, the Switzerland-based Bank for International Settlements said in its quarterly review. By contrast, volumes in the Americas fell just 25% in the first half of the year, while those in Africa, Europe and the Middle East were little changed due to some large deals.

“Cross-border investors may be particularly flighty when they face a large global shock such as the Covid-19 pandemic,” the BIS said. “It is then that their impact as marginal investors makes itself felt.”

7. Momofuku’s David Chang on the big changes the restaurant industry needs to make to survive | Fortune

Since opening up his revolutionary Momofuku Noodle Bar in New York City 2004, Chang has not only built a restaurant empire but also become a spokesperson for the industry as a whole with Netflix show Ugly Delicious, a podcast, and now his just-released memoir, Eat a Peach. In his new book, written with Gabe Ulla, Chang scrutinizes his own success, bipolar disorder, and depression with the same honesty and bluntness that has made him such a critical figure in food culture.

These days, his message is a dire one: Restaurants are an essential part of the “oil” that keeps society and the economy running smoothly—and they are struggling to survive amid the COVID-19 pandemic. Even Momofuku has had to close two of its locations. The chef is focused on advocating for the industry with elected officials, pushing for government assistance, and trying to create solidarity within the sector. The big question he’s trying to answer: “How do we fix this industry so it isn’t so fragile?,” he asks. “How do we make sure we don’t repeat these mistakes?”

The robotics industry is having a major moment amid the uncertainty of the COVID-19 pandemic. It’s true that category has been an exciting target for investments for a number of years now, but labor issues and concerns over transmission have led many sectors to take a good, long look at automation.

Meal preparation is a prime target. It’s an essential service and one that finds human hands coming into direct content with food. Leipzig, Germany-based DaVinci Kitchen is looking to tackle issues around food preparation with the launch of a modular robotic kiosk that cooks Italian-themed pasta dishes.

Four Cupertino office buildings occupied by Apple have been bought by a group led by an executive with a worldwide private real estate investment fund for nearly $74 million, pointing to Silicon Valley market strength despite the coronavirus.

The transaction, involving buildings on Bubb Road just west of State Route 85 and De Anza College, shows that investors have yet to slake their thirst for choice properties in the South Bay amid coronavirus-linked economic uncertainties.

The four buildings were bought by an investment group for $73.8 million, according to Santa Clara County public documents filed on Sept. 11.

10. Satellite Vu aims to scope out the whole globe with thermal vision | TechCrunch

Earth observation has grown from government-run missions to a crucial everyday business tool, but it still has room to grow. Specifically, into the thermal infrared spectrum, if startup Satellite Vu gets itself into orbit. The company plans to be able to monitor the heat signatures of most of the planet’s buildings with a satellite constellation built for the purpose.

Heat could indicate poor insulation, for one thing, and a waste of energy on HVAC. It could show the true (not reported) hours of operation at a factory or mine. It could track burning natural gas or waste emissions from refineries. With a resolution of 3 to 4 meters — an order of magnitude or more better than what’s out there — it might even be able to estimate the attendance of outdoor events or, for that matter, troop concentration in warfare. And of course it can do all this in the dark of night.

Baker told TechCrunch that he felt the Earth observation business, despite producing successful endeavors like Planet, still had lots of room to grow.