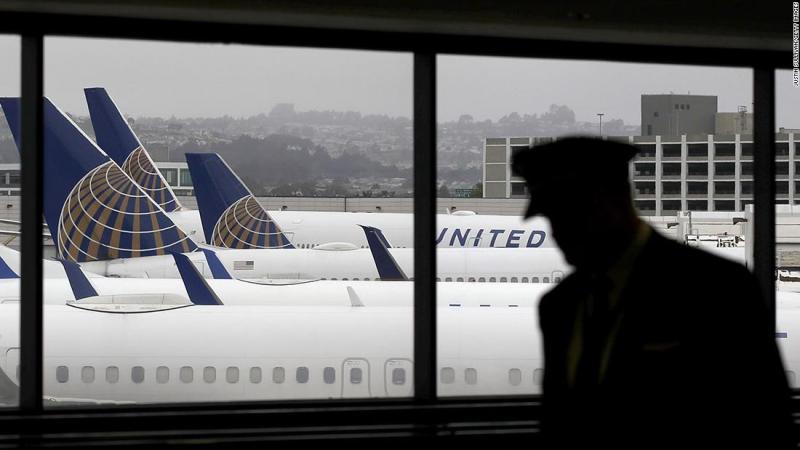 Two of the nation’s three biggest airlines by fleet size, American and United, are the latest casualties of U.S. lawmakers’ failure to secure ongoing coronavirus economic aid, with both airlines saying they could furlough a total 32,000 staff from Thursday after a deadline to keep employees on runs out.

United Airlines’s CEO Scott Kirby warned it would furlough 13,000 workers, but would reverse the move if lawmakers and the government agreed on payroll support, CNN reports, citing a memo sent to staff.
American Airlines CEO Doug Parker will start furloughing 19,000 workers from Thursday, but told CNN that the move would be stopped if lawmakers agree to bail out airlines with a $25 billion package.

October 1 is significant because it marks the end to conditions laid out in the first economic relief package, the CARES Act, which gave airlines $25 billion in payroll support on the basis that they held off on firing workers until September 30.

Also this week, the Treasury announced it had closed loans to seven airlines, another crucial source of funding agreed under the CARES Act, as it asked Congress to agree on a second package to support payroll.
Now that that deadline is up, and Congress has failed to agree on a follow up relief package, a further 17,000 jobs across more U.S. airlines are at risk, according to CNN.

Asana Inc. was the first direct listing out of the gate Wednesday, but Palantir Technologies Inc. trade even higher above its reference price amid dual debuts for the two software companies with ties to Facebook Inc.

At 1:40 p.m. Eastern, Palantir PLTR, 32.32% shares started trading, bolting out of the gate, rising more than 50% higher than the reference price. Shares were last up 32% at $9.50, following an intraday high of $11.42. NYSE had set a reference price of $7.25 a share based on private-market trades of the stock, and The Wall Street Journal reported last week that the company expected shares to open around $10.

3. As the Election Looms, Investors See Uncertainty. They Don’t Like It. | New York Times

Investors have spent recent months pushing the stock market to record highs, seemingly undeterred by the worst pandemic in a century and the enormous toll it has taken on the United States economy.

In the last few weeks, the market’s results have reflected the uncertainty weighing on investors’ minds as they prepare for what could be a politically turbulent stretch — including a Senate fight to fill the former Supreme Court seat of Justice Ruth Bader Ginsburg and the November presidential election, which could result in a constitutional crisis if President Trump refuses to accept the judgment of voters.

And the first presidential debate didn’t necessarily ease investor’s minds. Paul Donovan, the chief economist of UBS Global Wealth Management, wrote in a note to clients that, if anything, Tuesday’s debate “may have increased expectations for a contested election result,” after Mr. Trump again suggested that he would challenge an unfavorable outcome.

Stocks have lost steam since notching new highs in early September, with the S&P 500 stock index down about 5 percent for the month as of Tuesday’s close, facing its first monthly decline since March. And last week, the index hovered around correction territory — a Wall Street term used to signify a market drop of 10 percent or more from a recent high. On Wednesday, the market was up 1 percent in early trading.

4. These cities are at risk of a housing bubble as home prices inflate worldwide | CNBC

Despite a global recession brought on by the coronavirus pandemic, home values in major markets around the world continue to rise, with some at risk of overheating.

Of 25 major cities analyzed, more than half are either at risk of a housing bubble or are overvalued, according to UBS’ Global Real Estate Bubble Index 2020. The index looked at typical signs of a bubble, which include a decoupling of prices from local incomes and rents, and imbalances in the real economy, such as excessive lending and construction activity.

Europe appears to have the greatest risk of housing heat, along with Hong Kong. Munich and Frankfurt in Germany and Warsaw, Poland, top the list, with home prices rising more than 5% in the last four quarters. Paris, Amsterdam and Zurich are also in bubble risk territory.

If you want to see where the average Prague resident lives, you’ll have to put in more effort than a quick trip around the city’s historic heart.

Jump on a tram heading out of the Czech capital’s tourist-filled center and pre-1914 tenements soon give way to something very different: large complexes of modernist apartment blocks, their concrete often brightly painted after recent renovations, looming over greenery set back from the main road. Look closely at these apparently endless tiers of blocks that provide a rampart around the city, and you’ll see they are composed of row after row of concrete panels that give this type of building its Czech name — panelák.

Thrown up quickly and in great numbers from the late 1950s to the 1980s, the Czech Republic’s paneláks are likely the stuff of nightmares to a more traditionalist architect. It’s not just their modernist monumentality, or their resemblance to housing projects that in Western Europe and North America have connotations of poverty. It’s also their association with the communist system that built them, a system with which they tend to be so closely identified it can be hard to judge them on their actual faults and merits.

6. These Robots Use AI to Learn How to Clean Your House | Wired

At Toyota, researchers are experimenting with prototypes that swoop from the ceiling to take care of chores with the help of machine learning.

INSIDE AN ORDINARY-LOOKING home, a robot suspended from the ceiling slowly expands arms holding a sponge, before carefully wiping a kitchen surface clean. Nearby, another robot gently cleans a flat-screen television, causing it to wobble slightly.

The cleaning robots live inside a mock home located at the Toyota Research Institute in Los Altos, California. The institute’s researchers are testing a range of robot technologies designed to help finally realize the dream of a home robot.

After looking at homes in Japan, which were often small and cluttered, the researchers realized they needed a creative solution. “We thought, you know, how can we use the ceiling?” says Max Bajracharya, VP of Robotics at TRI.

In another Toyota lab, in Cambridge, Massachusetts, robots practice picking up cups and plates and loading the dishwasher. In order to operate reliably, and without damaging anything, the robots rely on artificial intelligence algorithms that learn how to grasp objects correctly. The robot also uses a soft gripper equipped with a sense of touch that TRI developed.

Walmart is getting inspiration from the airport terminal as it revamps the layout and signage of its stores to speed up shopping and better cater to smartphone-armed customers.

The nation’s largest retailer, based in Bentonville, Arkansas, said that the look, which includes signs with bold dimensional typeface spotlighting sections, is currently in one store. It will be rolled out to 200 stores by early next year, with plans to add another 800 stores by early 2022.

Walmart says it was working on a new store layout a year ago. But the pandemic accelerated those efforts as customers are increasingly focused on contactless shopping amid safety concerns.

8. Why the real estate boom could keep going for years | Axios

Even after reaching all-time high average prices and sales numbers not seen since the height of the 2000s boom, the housing market still has lots of room to run, experts say.

What’s happening: There were fears in late 2019 and early this year that price levels had outpaced income growth and become unsustainable — but record-low mortgage rates and promises by the Fed to keep U.S. interest rates at zero through at least 2023 have lit a new fire under the market.

Where it stands: Home prices rose 4.8% nationally in July, according to the latest Case-Shiller Home Price Index.

“Weekly home price data show that sellers are raising asking prices at a double-digit pace, and surprisingly, eager buyers are willing to give them what they’re looking for,” says Danielle Hale, chief economist for Realtor.com.

Agencies battling wildfires in California are turning to artificial intelligence and other technologies to predict the spread of blazes and help guide the response of firefighting crews.

The AI-based tools are helping officials monitor fires, evacuate threatened areas and send often-stretched resources to places they will do most good.

This year, wildfires in California alone have burned more than 3.8 million acres, according to the California Department of Forestry and Fire Protection, or Cal Fire, which has been leading many firefighting efforts in the state. Since mid-August, at least 29 people have died.

And wildfires continue to burn. This week, the Glass Fire in California’s wine country prompted mandatory evacuation orders for Calistoga, a city of more than 5,200.

Fire prediction tools are helping officials in the area and across the state gain greater visibility into how big a fire might get and where it might be headed, said Geoff Marshall, a division chief in Cal Fire’s Predictive Services program. Predictive Services does modeling for seasonal trends and outlooks for firefighters and fire managers.

On the heels of its launch in the GTA, Properly secures major financing deal to overhaul the Canadian home buying process

TORONTO, Sept. 30, 2020 /CNW/ – Following the launch of its first-of-its-kind home buying and selling service in Toronto last month, Properly, a Canadian real estate technology company, experienced a flood in demand, piquing the interest of homebuyers and attracting the interest of leading investors.

Today the Toronto-based company announces it has secured a $100 million credit facility from two leading U.S. finance firms – Silicon Valley Bank and i80 Group. This financing helps Properly enable its end-to-end real estate service, which helps Canadians purchase and move into their new home before selling their current one.

After witnessing the explosive growth of technology-driven innovation in the U.S. real estate market, the two leading firms behind the financing — Silicon Valley Bank, a bank focused on serving technology and life science companies and their investors, and i80 Group, a specialty finance firm that supports breakthrough fintech and proptech — are working with Properly to bring the same level of disruption to a Canadian market that has historically lacked innovation.