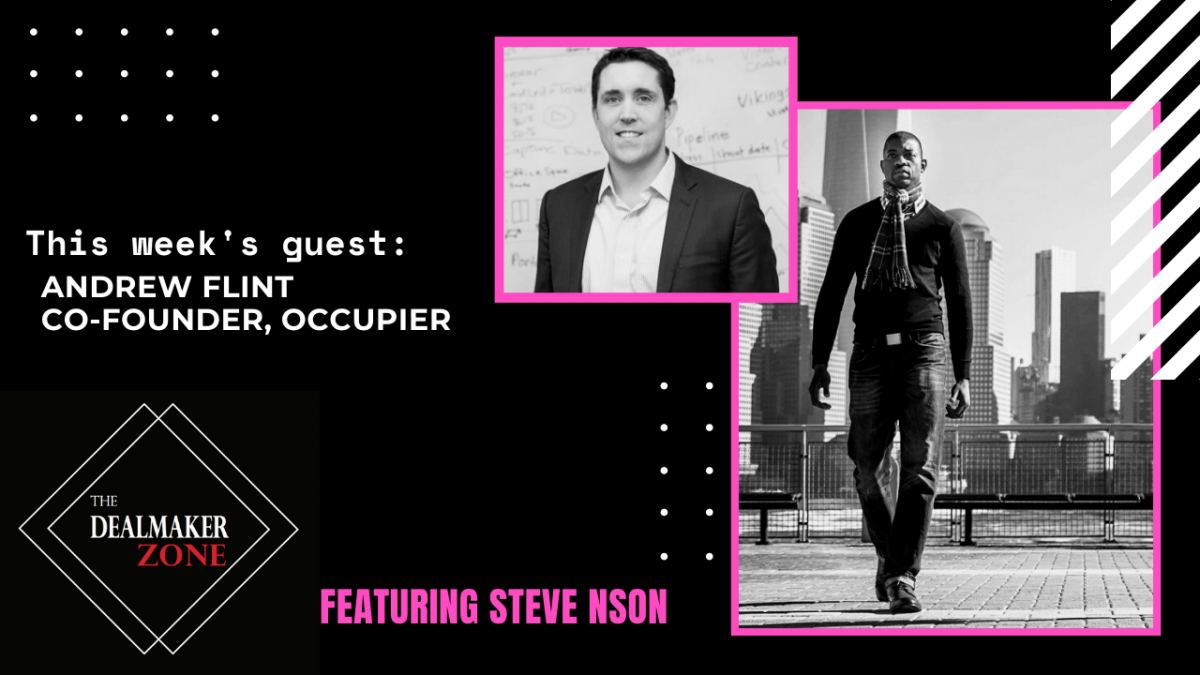 1. This Week on The Dealmaker Zone | Andrew Flint – Co-Founder, Occupier

On this week’s episode of The Dealmaker Zone, Steve Nson talks to Andrew Flint, Co-Founder of Occupier about the state of the real estate market, the acceleration of tech adoption, the future of work and much more. 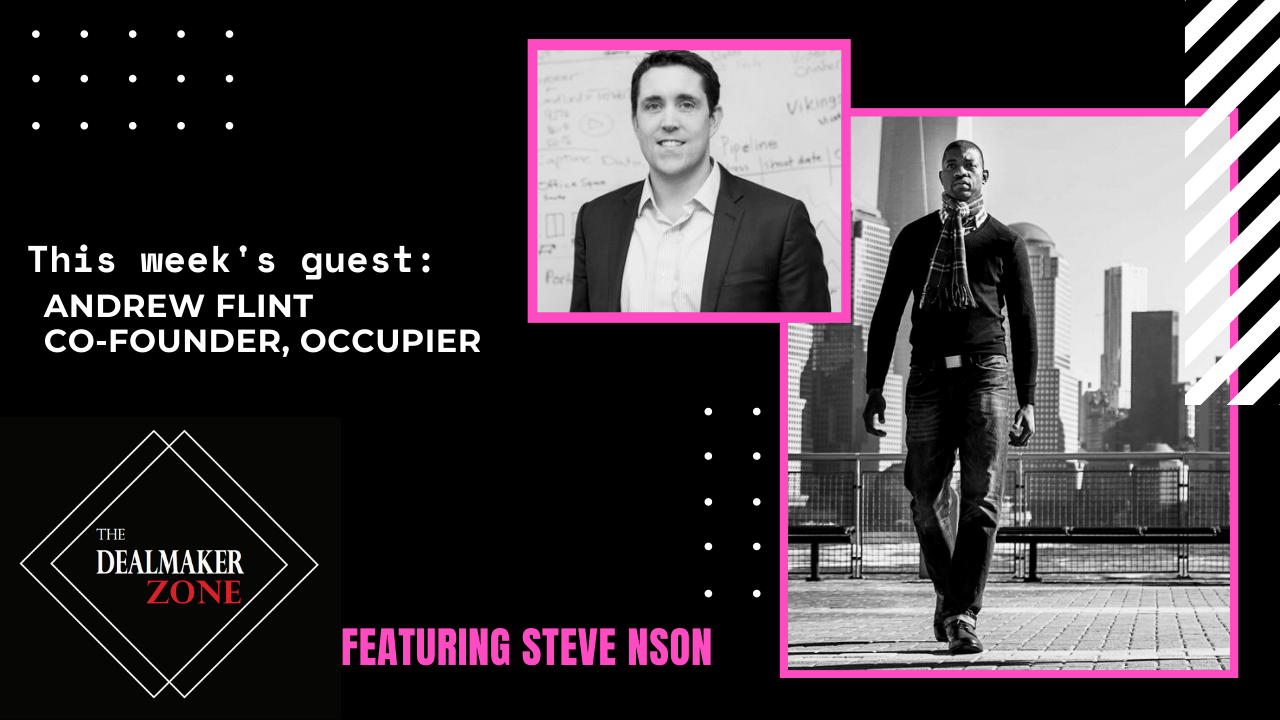 The company that created the popular videogame “Fortnite” has agreed to purchase a North Carolina mall and plans to redevelop it as a global headquarters, the latest sign that struggling malls are evolving into new kinds of real estate.

Epic Games Inc., the closely held company based in Cary, N.C., said it is planning to convert the 980,000-square-foot Cary Towne Center mall into offices and recreation space for its growth in the long term. Epic plans to open the new campus by 2024, which would represent a sizable upgrade from the company’s 250,000 square foot headquarters.

The acquisition and office-expansion plans show that even as many companies aim to reduce office space and embrace work-from-home policies, others still see a new and larger office location as a big part of the future.

3. City Apartment REITs Await the Return to the Office | WSJ

Shares of real-estate investment trusts that are big owners of rental apartments in New York, San Francisco and other large urban areas got clobbered last year as investors worried about the pandemic’s impact on cities.

How are these companies likely to fare in 2021? Much depends on when businesses feel it is safe enough to call the majority of their employees back to the office and the magnitude of that potential influx.

“The real catalyst in my opinion for these stocks is work-from-home mandates reverse, and then you should see demand come back into these cities,” said Amanda Sweitzer, an analyst at R.W. Baird.

The coronavirus pandemic turned the rental-apartment market upside down in 2020. Before Covid-19 hit, rents in many cities were outpacing those in the suburbs as urban areas attracted young professionals seeking downtown amenities and shorter commutes.

While the “15-minute city” model promotes neighborhood-level urban planning, Sweden is pursuing a hyper-local twist: a scheme to redesign every street in the nation.

In 2020, as pandemic lockdowns forced billions of people around the world to become intimately familiar with their neighborhoods, one of the hottest ideas in urban planning was the “15-minute city.” A vision for a decentralized urban area that allows residents to meet their daily needs within a quarter-hour walk or bike from their homes, the concept has been pursued as a means of cutting greenhouse emissions and boosting livability in a host of global cities — especially Paris, where Mayor Anne Hidalgo has embraced the model as a blueprint for the French capital’s post-Covid recovery.

Now Sweden is pursuing a hyperlocal variation, on a national scale. A plan piloted by Swedish national innovation body Vinnova and design think tank ArkDes focuses attention on what Dan Hill, Vinnova’s director of strategic design, calls the “one-minute city.” It’s a order of magnitude smaller than other recent think-local planning conceits. While Paris works with a 15-minute radius and Barcelona’s superblocks with nine-block chunks of the city, Sweden’s project operates at the single street level, paying attention to “the space outside your front door — and that of your neighbors adjacent and opposite,” Hill says.

5. The Future of Offices When Workers Have a Choice | The New York Times

Coronavirus will not kill the office. If anything, it figures to be more dynamic than ever. The ability to work remotely will not drive most people away from cities and offices, but it will enable many to live and work in new ways and places — while causing its fair share of disruption.

Even before the pandemic, there were signs of trouble with the office market in the handful of cities where the “creative class” had been flocking. In 2018, net migration to New York, Los Angeles and San Francisco was negative, while the U.S. economy grew at a healthy 2.9 percent. Creative magnets like London and Paris were experiencing similar declines.

The explanation for the declines — mostly high housing costs because of severe limits on new construction — obscures other forces that were destabilizing the traditional office market. In the middle of the 2010s, Amazon, Facebook, Google, Apple and others started splitting their headquarters into multiple locations. Stripe, one of the world’s most valuable start-ups, went a step further. In 2019, it “opened” a remote hub, hoping to “tap the 99.74 percent of talented engineers living outside the metro areas of our first four hubs” in San Francisco, Seattle, Dublin and Singapore.

Instant delivery of packages, groceries and restaurant meals are one step closer to a reality under new commercial drone regulations.

For the first time ever, unmanned aircrafts will be able to both fly over people and operate at night under new rules cemented by the U.S. Federal Aviation Administration. The changes will bring a boost to the future landscape of the commercial drone industry, which is sending more companies to produce drone fleets to expedite deliveries.

7. Macy’s is shuttering 45 more locations this year, as part of its 3-year store closure plan | CNBC

Macy’s has notified the employees at about 45 of its department stores that they will close by the middle of this year, CNBC has learned.

The closures are part of a previously announced plan by Macy’s to shut 125 locations by 2023, which the retailer outlined last February.

“As previously announced, Macy’s is committed to rightsizing our store fleet by concentrating our existing retail locations in desirable and well-trafficked A and B malls,” a spokeswoman told CNBC in a statement.

“To that end, we announced several store closures today that align to the guidance we provided in February 2020,” she said. “These closures bring us closer to achieving the right mix of mall-based stores.”

The property last traded for $10.5 million in 2014, so it gained a significant amount in value without any major construction taking place.

Utah-based digital mortgage company has raised a total of $128M

SimpleNexus, a digital mortgage startup, announced on Tuesday that it picked up $108 million in a Series B funding round. The fund raise comes as the company attempts to increase its marketshare within the eClosing and mobile mortgage segments.

The platform allows loan officers to become “mobile originators,” using their smartphones to view applications, pull credit reports and oversee all aspects of the loan process while connecting in real-time to their LOS.

Elon Musk is officially no longer a Los Angeles homeowner. The Tesla and SpaceX tycoon began 2020 with six Bel Air houses to his name, but in June he sold the largest of them for $29 million to Chinese billionaire William Ding. In October, he sold a second property, the former Gene Wilder house, to Wilder’s nephew. And now he has seriously made good on his promise to “own no house” — records show the four remaining Musk properties have sold in a nearly $62 million single deal. The buyer is prominent local developer Ardie Tavangarian, who first announced the purchase to Bloomberg way back in July, though the sale didn’t close until just last week.

Musk originally put the four houses up for sale in May as a package estate tagged with a $62.5 million asking price, but the unusual thing about the estate is that it’s not really an “estate” at all — only two of the homes are contiguous, and all four structures have wildly divergent architectural styles. One of them is an ultra-contemporary mansion; next door is an elegant neoclassical Colonial house. Across the street lies a modest traditional bungalow, while the house on the hillside below was originally built in 1954 as a humble midcentury modernist ranch, but has since been majorly redone into a sprawling mansion that’s perhaps best described as ’90s modern, with a midcentury twist.